The Oak Ridge Lady Wildcat Volleyball Team visited District rival Bearden on Thursday night in a rematch of Oak Ridge’s 3-1 victory earlier in the season.  The ‘Cats ran their offense consistently and were able to sweep the Lady Bulldogs in straight sets.  “What a great game tonight,” said Head Coach Dave Kolodney.  “We came out fired up and played fast and strong from the get go.  We were able to go on a number of runs while limiting a very good Bearden team to just a few small ones.”  On the back of strong passing and digging, the Lady Wildcats achieved their highest Kills/Set of the past two seasons, averaging 15 Kills/Set across the entire match.  “We had one of our best passing nights especially in the second set with a 2.6 rating,” continued Kolodney.  “When you pass so successfully it opens up tons of options for your offense and we were consistently able to capitalize on those.”  Oak Ridge was led by Sophomore Middle Hitter Marybeth Luby who received 16 serves without an error and dug at an 88% rate.  ORHS had their entire starting line-up back for the first time in nearly 3 weeks.  “I’m looking forward to this group playing strong over these last 2 weeks of regular season play to prepare for October,” Kolodney finished.

The Lady Wildcats take the weekend off and then travel to Maryville on Monday night.  The Lady ‘Cats return to District play on Tuesday and Wednesday at West and at home against Campbell County.  Oak Ridge is 19-6 (9-0 District) on the Season. 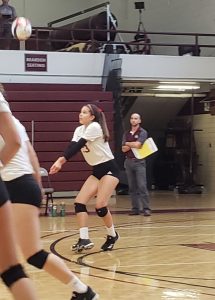